There isn't ever going to be another 50th Anniversary of Doctor Who, and this is a community where fans of the greatest television show of all time can come together to mark that occasion and celebrate it together. It's a place for people to post about the anniversary itself, about 50th anniversary-related media and news, meta about what Who means to them, details of RL events they're participating in or organising to celebrate, or just general japery. Fan fiction, fan art, fan vids, fan mixes and all other forms of creativity are more than welcome.

There are going to be monthly fanworkathons (as said above, all fiction, art, vids, podfic etc, etc welcome), one a month for the duration of the anniversary year and covering all of the Doctors to date, starting in January with Eleven and counting down to the anniversary itself in November 2013. Here are the fanworks that have been produced already this year, as well as the fanwork-a-thon schedule for the remaining months:

I hope as many Who fans as possible, of whatever age and duration, fans of whatever era in the history of the show and its many spinoffs and associated media, join and participate in this comm. And I hope together we can play our small part in making 2013 a year to remember!

TARDIS Library's winter Seasonal Challenge is open! Simply choose your own theme for reccing and complete the challenge by reccing 5-25 works! Make your claim & find out more at the challenge post. (Challenge closes on 7th Feb 2019).

You can also leave requests for recs you would like to and post recs for December's monthly theme (for works set in the Eighth Doctor's Era, or focusing on 'History') - see here for more details

And, of course, more general recs for any fanworks are also welcome at any time!

TARDIS Library's monthly theme for the anniversary month of November is Multi-Era. And our current Seasonal Challenge is still ongoing for those who'd like to claim a character. You can also leave requests for recs you would like to see and find more details here 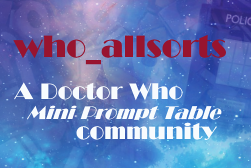 who_allsorts is a prompt table community open to all types of fanworks and all corners of the Doctor Who Universe. It's an old school style prompt claiming community, with bite-sized tables (varying from 3-20 prompts) and a more flexible approach to what can be claimed (characters, pairings, eras, themes, spin-offs etc.). Come on over, claim up to two tables at one time, and create new fanworks for Doctor Who - and everyone profits!

Further information can be found at the comm. Click on the banner for link.

TARDIS Library's autumn Season Challenge is open! Simply claim a character and complete the challenge by reccing 5-15 works featuring that character! Make your claim & find out more at the challenge post. (Challenge closes on 6th Dec 2018).

You can also leave requests for recs you would like to and post recs for September's monthly theme (for works set in the Eleventh Doctor's Era, or focusing on 'Time') - see here for more details

And, of course, non-themed recs are also welcome at any time!

TARDIS Library's monthly themes for July are the Fourth Doctor and Holidays.

Our summer reccing bingo is still ongoing for those who'd like a card. You can also leave requests for recs you would like to see & find out more here

TARDIS Library's monthly themes for June are the First Doctor and Humour. And our summer reccing bingo is still ongoing for those who'd like a card. You can also leave requests for recs you would like to see here

Click on banner for the link to the comm on Dreamwidth:

A reccing community for Doctor Who and all related fandoms for all fanworks. Members can post recs at any time but there will also be monthly themes and seasonal challenges. (Clink on banner for link.)

jjpor (aka the mod round here) has posted this announcement to the Dreamwidth side of the comm:

You know how it is. You decide to dust off the old LJ after a couple of months of inactivity in anticipation of the new series of Doctor Who (tomorrow, folks, as if you weren't well, well aware of it), and discover that...well, I'm sure you're also well, well aware of the Putin-related Terms of Service unilateral auto-foot-shooting that Livejournal's owners have indulged in. I actually wasn't until I tried to log on yesterday, but I am now.

So, in all conscience, I don't actually feel I can continue to post things to LJ, unless the world unexpectedly comes to its senses at some point in the future. I'm not hopeful of this happening, I'll be honest.

So the LJ version of the Who@50 comm is effectively defunct as of now. The comm will, however, continue pretty much as normal over here on DW, if normal is the word. Not sure how to announce this on LJ without agreeing to the ToS, so I guess I'm just hoping people see it here on DW.

I had planned to be the last person on LJ along with lost_spook. Alas, it was not to be.

I now return you to your normal programming.

Please reply at the Dreamwidth post, if you can.

dw_guestfest is a low pressure ficathon for all minor/guest characters from any corner of the Whoniverse.

Open now for both prompts and sign-ups!
Collapse